The aquaculture industry is an important economic activity on all coasts of Ireland. A significant proportion of the activity occurs within, or in proximity to, Natura 2000 sites which are designated areas under the EU Habitats and Birds Directives.

Many Natura 2000 sites are designated as Special Protection Areas (SPAs) for wading birds. Such areas, typically inter-tidal mud and sand flats, support nationally and internationally important populations of waders that over-winter in these habitats in Ireland. These bird populations feed on various species of invertebrate that have accumulated in biomass during the summer and early autumn period. Over-wintering survival of wading birds is mainly a question of energetics; availability, access and intake of food must provide sufficient energy to maintain body condition. Significant decline in body condition can lead to mortality or lower reproductive fitness in the following year.

The aquaculture industry in SPAs, designated for wading birds, may have an impact on the fitness of these birds. This could come about due to targeted removal of prey species such as bivalves; by causing mortality of other non-commercial invertebrate prey species that come into contact with aquaculture installations; by alteration of the habitat and the invertebrate communities it supports and by reducing access to food or time available to feed by disturbing flocks of feeding birds.

Article 6 of the Habitats Directive requires that the impact of projects or plans, such as aquaculture enterprises or licencing of fisheries, be appropriately assessed in relation to the feature (habitat, species) for which the site was designated, so that the likelihood of significant effects on the feature can be objectively estimated. Only when the likelihood of significance has been discounted can these activities be licenced in Natura 2000 sites. This project will investigate the interactions between proposed aquaculture activities and Natura features (birds) in seven SPAs and make recommendations in relation to subsequent licencing and management of aquaculture activities in the sites. The SPAs of interest are Clonakilty Bay SPA (4081), Castlemaine SPA (004029), Ballysadare Bay SPA (004129), Killala Bay/Moy Estuary SPA (004036), Courtmacsherry Bay SPA (004219), Cork Harbour SPA (004030), Carlingford Lough SPA (002306).

Appropriate assessment reports for aquaculture activities in the seven SPAs of interest to Aquaculture and Foreshore Management Division of the Department of Agriculture, Food and the Marine) and follow-up advisory services. 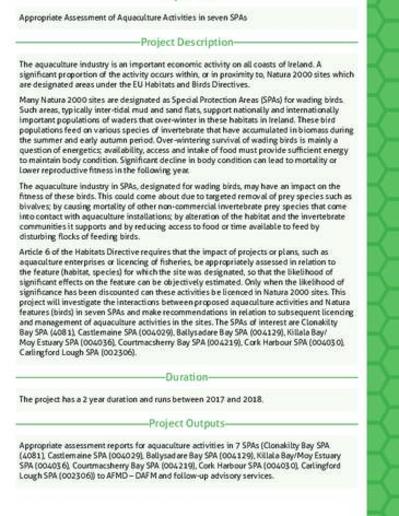