Consistent with sub-article 6.2 of the Habitats Directive (EC 92/43/EEC), which requires member states to take measures to avoid deterioration of protected habitats, Ireland will undertake a further mapping survey of offshore reefs in 2019 to evaluate status and introduce conservation and management measures in proportion to status and pressures from fishing. This study has been identified as highest priority by DAHG for the marine environment and is based on a letter by DAHCG to DAFM (attached).

Under the Habitat’s directive reporting requirements, Ireland has reported to the European Commission that Annex I habitat reef is in unfavourable/bad status in its waters, and this is primarily arising from fisheries-related issues in the offshore resource. Reviewing habitat fisheries interaction and arising conservation requirements is of high priority for offshore reef habitats to fulfil Ireland’s obligation under the habitat’s directive. Existing information and datasets on deep Ireland’s deep reef habitat have been collated to assess the known extent and status of reef in water depths greater than 200m and evaluate sensitivities of deep reef habitats as part of a commissioned desk study by DCHG.

Spatial information on reef habitats was overlaid with VMS data from fishing vessels disaggregated by fishing gear to link potential impact with habitat sensitivity and identify data deficiencies.
The desk study on reef habitats combined with the analysis of terrain data derived from the INFOMAR national seabed survey along with the spatial VMS overlay has formed the basis of reef habitats selected for direct observation as part of reef surveys over the past two years. The surveys are using Ireland’s remote operated vehicle and a drop-frame camera to collect video footage and stills along fixed transects for detailed investigation and mapping of Annex 1 reef
habitat.
Areas of focus are reefs with high conservation value and low interaction of fishing effort.

In selecting new sites to be surveyed for 2019, the following aspects will be taken into account:
1. Existing data records
2. Level of fishing pressure, focussing on low impact sites;
3. Geographical distribution in relation to existing designations.
4. Coverage of sites in 2017 and 2018 as part of SeaRover project Phase 1.

The 2019 survey will visit an existing SAC designation and monitor signs of impact and recovery along transects that have been previously surveyed in 2009. This data will be used to evaluate detection of change and effects of mitigation in designated sites.
The project will be carried out in close collaboration with the Marine Institute (with contribution from the service areas of Advanced Mapping, Fisheries and Research vessel operations) and DAHG to ensure appropriate staff expertise is provided and project objectives are achieved.
Final data analysis, compilation and dissemination will be concluded at the end of the project (2020). A consultation with the most important endusers will be carried out to ensure that that data products and dissemination processes are adequate and fit for purpose.

On a national level, the critical endusers are DAFM, DCHG, DPHLG, DCCAE. On an international level, the endusers include ICES, OSPAR and the EU. The National Biodiversity Centre will be included in the consultation to maximise existing dissemination tools.

5. Data output of each reef survey:

8. Outreach material relating to the above.

1. Characterisation of offshore reef habitat in Irish EEZ at selected sites to include existing designations and areas of low fishing impact and limited data availability
2. Evaluation of fishing impact on reef habitat at selected offshores sites
3. Input data to support reporting requirements for Ireland under the Habitats Directive and Marine Strategy Framework Directive.
4. The 2019 survey will visit one of the offshore SACs thus providing comprehensive data for the completion of the site specific conservation objectives for this SAC.
5. Of the six offshore SACs all bar one have been surveyed over the three years of this programme; the last site will be visited in 2019 thus completing the monitoring of all of Ireland’s offshore SACs. 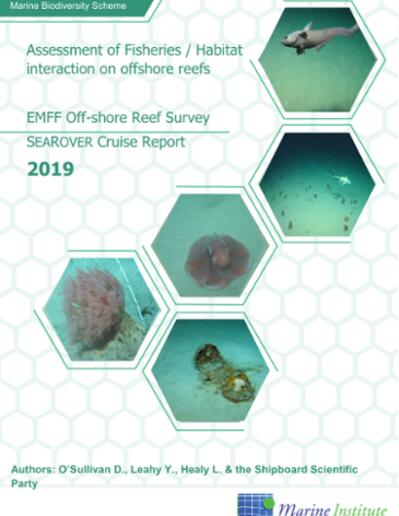